Vietnam is one of the lucky countries that owns many waterfalls with wild and magnificent beauty. Bellow, here is a list of the ten most beautiful waterfalls in Vietnam stretching from North to South.

Ban Gioc Waterfall in Cao Bang province. This is the largest natural waterfall in Southeast Asia. The waterfall has a height of over 30 m, with many large bodies of water pouring down through many layers of limestone. The white waterfall stands out in the middle of the green and majestic space, creating a picturesque scene. Ban Gioc Waterfall is the most beautiful landscape in Vietnam, with tens of thousands of visitors every year.

Elephant waterfall, also known as Lieng Rowoa waterfall, belongs to Nam Ban commune, Lam Ha district, Lam Dong province. The waterfall is about 30 km from the center of Da Lat city. Standing from the top of the waterfall, visitors can see firsthand the undulating rock formations shaped like kneeling elephants. Elephant waterfall attracts tourists by the wild beauty of the mountains and the touching story of the fierce love of the mountain girl Lieng Rowena. 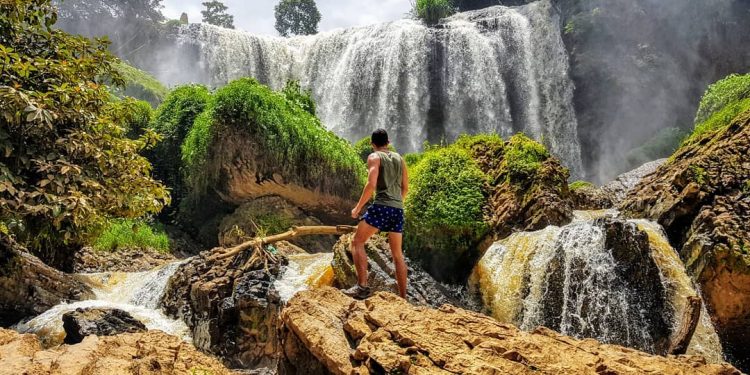 Pongour Waterfall is located in Tan Nghia village, Ninh Gia commune, Duc Trong district, Lam Dong province. Pongour was once considered by the French as the most majestic waterfalls in Vietnam.

The unique beauty of the waterfall lies in the system of flat stone steps, layered and “tearing” the water source into hundreds of small streams forming white foaming carpets. Below the waterfall is a vast, peaceful lake with many undulating rocks. 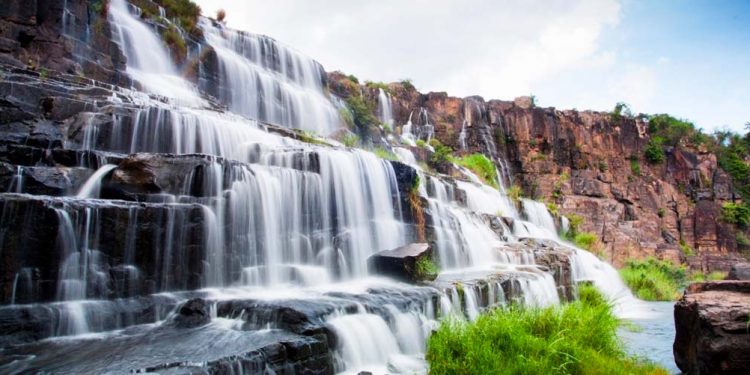 Mu waterfall is located in Mu hamlet, Tu Do commune, Lac Son district, Hoa Binh province. The waterfall is known as a paradise for those who love to travel.

In particular, the waterfall has only one water source flowing out from the mountain range. At the foot of the waterfall, there are many swirling glasses of water, creating the feeling of a giant massage pool. 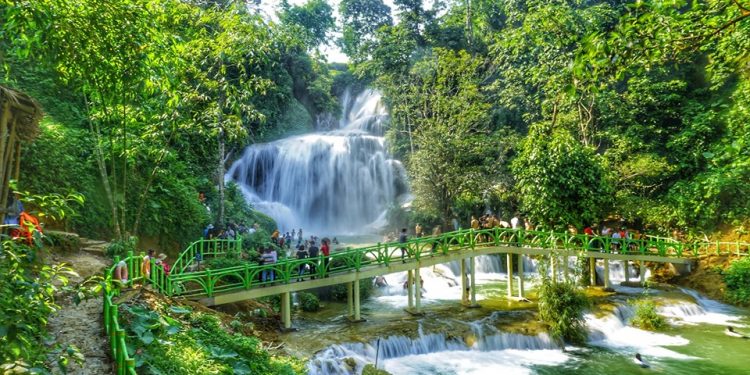 At the foot of the waterfall, the water gathers into a relatively large lake, then spills out to form a small clear stream, creeps through the mountainside, and then flows down the valley of Tam Duong district.

May Waterfall is the most beautiful waterfall in Thanh Hoa. The waterfall is poured down from the top of Thach Lam mountain, at an altitude of about 100 m, with 9 nine cascades overlapping to form soft waters.

The legend of 9 fairies at May waterfall representing nine steps of the waterfall is one of the tourist attractions. May Waterfall has water all year round but will be most beautiful around August onwards. Photo: Tran Quy Thinh.

Love Waterfall is nestled in Hoang Lien National Park in Son Binh Commune, Tam Duong District, Lai Chau Province. The road to the waterfall is paved with clean and beautiful stone with two rows of green bamboo on both sides and the majestic Hoang Lien Son mountain right in front of you. Love Waterfall flows white amidst the green of the surrounding forests.

The waterfall’s foot is a vast lake; you can see the rocks in the lake bed, surrounded by plants with many colorful flowers. The water from the cascade flows down very clearly; visitors can also see and play with the fish swimming at their feet.

Dray Nur waterfall is located in Ea Na commune, Krong Ana district, Dak Lak province. This is the most majestic waterfall in the Central Highlands.

At the foot of the waterfall are tributaries flowing smoothly around the rocks, the water is shallow and clear blue, you can see schools of fish swimming, immersing in the cool water.

In the dry season, visitors can also experience the feeling of walking on a long suspension bridge to admire the whole scenery of the mountains here.

To conquer the Dambri waterfall, visitors can walk about 138 steps, take an elevator, or experience thrills with a 1,650 km slide. Surrounding the waterfall is a forest of 300 hectares, protected almost intact with many rare bird species. 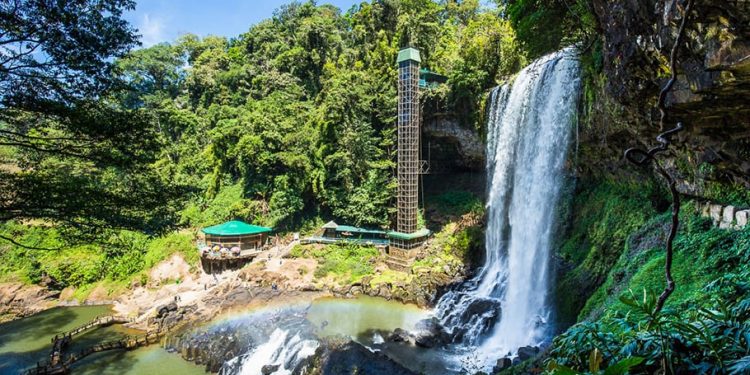